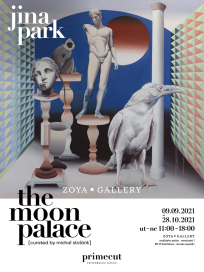 The unique paintings by the Korean artist Jina Park catch one’s attention at first sight with their ambivalent nature. This results from her connecting intense colouring, flamboyant visual exotism, and familiar images to a dreamy, almost surrealistically absurd atmosphere unfolding through unspecified spatial vistas with distorted perspective. Tense emotions accelerate styled, apparently cold architectural elements with a seeming illusion of life existing in a time vacuum, ingeniously used by Jina Park to preserve references to the past, elements of the present, and her own vision of the future.

Jina Park’s artwork organically combines influences of the New Leipzig School with lessons learned from traditional Korean painting techniques, the artist openly drawing inspiration from surrealism or German New Objectivism. Her move from Leipzig to Berlin and subsequent confrontation with a new cultural and social phenomenon was a key determinant in directing her vision. The current exhibition project, The Moon Palace, is a natural follow up to her former series of paintings – Collector’s Room (2018) and The Guardians of Cabinets (2020) – used by Park to define her artistic expression, unique style, and technological procedures. She builds her multi- faceted visual compositions like collages, freely combining abstracting geometric form with specific natural elements and sculptural works appropriated from art history. Her selective approach to painting and visual curatorship gives her freedom in composing hierarchical relations, thus turning the resulting scenes into a resemblance of still lifes or theatre sets. The artist finds prototypes of animals, sculptures, plants, or objects in historical books, museums, and zoological or botanical gardens, often linked to imperialistic history. Artistic recontextualisation allows their new interpretations, while directing attention to individuals’ desire for ownership.

The artist’s paintings are inspired by historical collections and so-called Wunderkammer (cabinets of curiosities), which in the past not only used to reflect the taste of their owners but also communicated the owner’s social status. Convergence of various natural, ethnological, and geographical objects, innovations, exotic animals or plants, artistic artefacts, and religious relics preceded modern museology, even as monarchs and aristocrats were forerunners of the first curators. In the 18th century, Chinese missionaries also expanded the Wunderkammer concept to Korea. Chaekgado – the oriental reconstruction of curiosities cabinets – materialized as painted bookcases with depictions of various exotic objects along with book motifs. Chaekgado paintings got Park acquainted with the cabinet of curiosities, which then inspired her to create her own version. Not only does she give attention to the seemingly innocuous topic of collections, but she also reflects on and criticizes European imperialism and colonial exploitation, both rooted in a quest for power, ownership, and the conqueror’s vanity. Depictions of animals and plants are one possible example of this, allowing her to react to the cultural appropriation of European powers that in the 19th century opened zoological gardens full of exotic animals.

The concept of the The Moon Palace exhibition project builds on a selection from current paintings and drawings. For the viewer to acquire a more comprehensive idea about Jina Park’s artwork, we have combined the above with a selection from her previous painting series, titled Collector's Room (2018) and The Guardians of Cabinets (2020). In this ample individual exhibition, Park continues to deliberate on the desire for personal ownership, demonstrated through visual painting collages. Her

inspiration for plant motifs comes from botanical gardens, and zoological gardens when it comes to the animal figures, and the museums and galleries she has visited in the case of the chosen architectural elements and sculptures. The final compositions are a result of her personal preferences, though Park does not intentionally explore or deal with the mythology or symbolism of historic archetypes, nor does she define animal personifications. Yet she remains open to individual interpretations of the viewers though. The artistic selection stems from her individual taste, which naturally brings together a wide spectrum of art history and contemporary cultural references. Thus she naturally links high art to kitsch yielding a new, individual hierarchy based on her personal outlook on the world.

The use of egg gouache, a very rare technique in this country, lies at the essence of Park’s original artistic expression. A slow mixing of pigments with eggs or other emulsions, documented from the first century of the Christian era, is the closest link to Korean painting technique. Jina Park actuates this highly time-consuming and demanding historic technique, incomparable with the flexibility of oils or swiftness of acrylics, with motifs of her choice, pronounced colouring, and subtle organic “ mistakes” that emerge once the painter’s tape is removed from the canvas. Contemporary-looking abstract coloured areas and geometric shapes contribute to the ambivalent visual character, though she has borrowed them from decorations in curiosities cabinets, using them to build spatial illusion and shortcuts in perspective.

Already during her studies, Park was confronted with Eurocentric prejudices and the oriental view on her works. She was advised to embed more Asian realia or “Korean” aesthetics into her paintings. Reflecting national identity has, however, never been her chief theme. She has striven to achieve her own unique artistic expression. These misconceived expectations have prompted her to think about her own identity, individualism, and whether nationality should be reflected in artistic work. It may well also be thanks to this unsolicited advice that her works thrive in a global context, while remaining genuinely loyal to their identity and style.

Jina Park (b. 1980) was born in Seoul and lives and works in Berlin. In 2003 she finished her bachelor studies in oriental painting at the Korea University in Seoul. After four years of active work on the Seoul artistic scene she moved to Germany, where she graduated from the Academy of Visual Arts in Leipzig under the leadership of Professors Neo Rauch and Heribert C. Ottersbach in 2012. She has given solo exhibitions at NON Berlin (Berlin), UNC Gallery (Seoul) and UBIK Space (Vienna), and her artwork was displayed in group exhibitions in the galleries of New York City (Satellite Art Club), Seoul (Hangaram Art Museum, Amore Gallery, S Factory), Hong Kong (UNC Gallery), and Berlin (Plateau Gallery, Art von Frei).